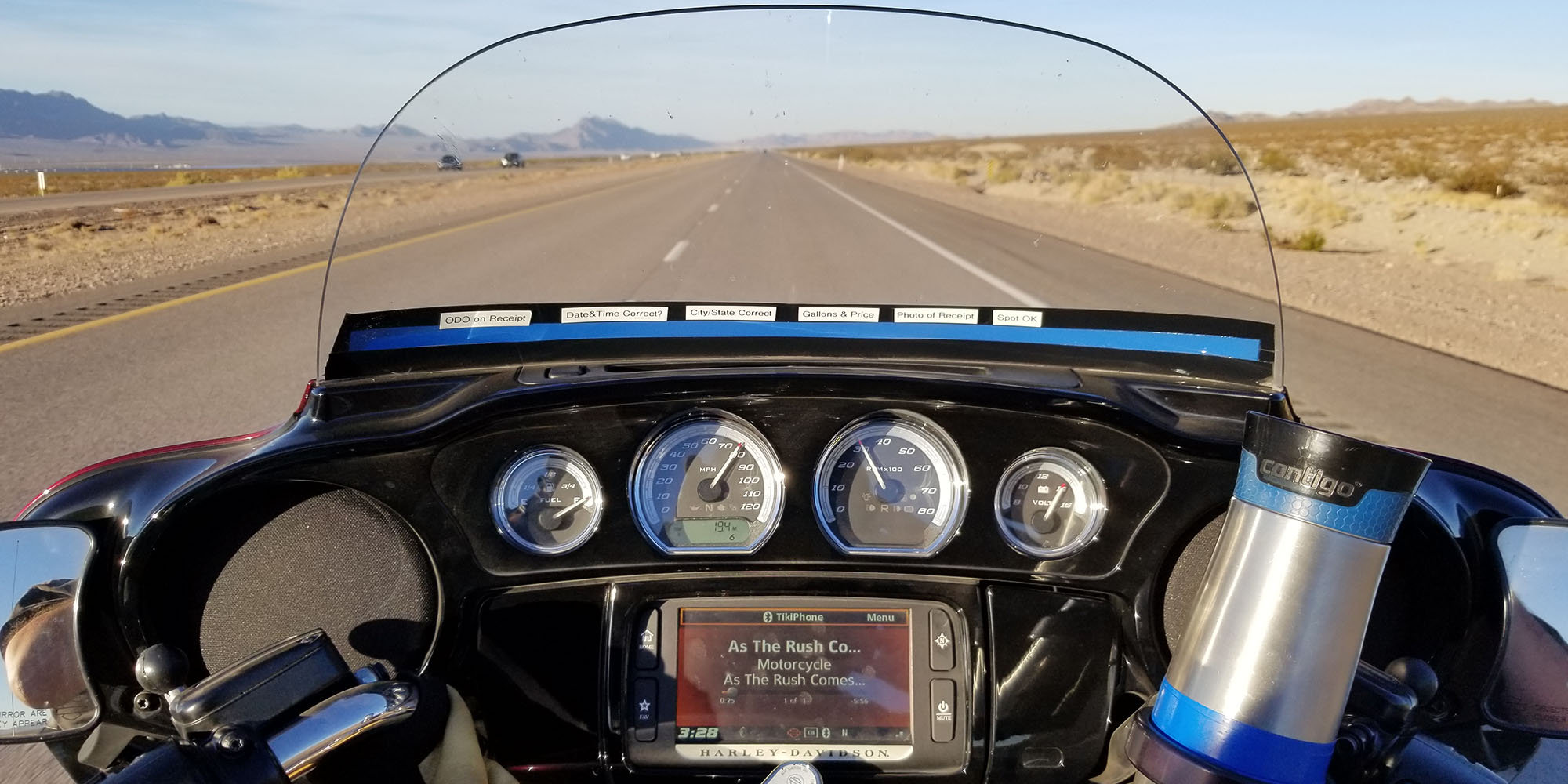 Wagers were taken on “”whether or not the bomb would ignite the atmosphere, and if so, whether it would merely destroy New Mexico or destroy the world.”

First and foremost, I have to recognize Brian T. in the Iron Butt Community. He conceptualized this ride and on October 2017, him and his wife were the first people to get this certificate. You can read more about his ride on the Iron Butt Forums.

As soon as Brian posted his ride report, it had peaked my interest. I liked that this was a new ride and I have been fascinated by all things nuclear so what better place to go, than ground zero where the nuclear age began.

I started playing with route ideas right away and eventually I ended up with a plan that would have me leaving Phoenix early Saturday morning on April 7th, riding to the Trinity site then returning back home to Las Vegas.

On April 7th, I started my ride as planned and left on time at 03:00am. I left Phoenix behind me and entered the Tonto National Forest where once again, I was reminded of that one stupid error that I make EVERY time… I didn’t bring my heated gear.

It’s not that I forget to bring it. I just simply don’t want to bring it. I would rather be mildly uncomfortable than pack it. For everyone that’s going to comment on this, all I can say is “I know.” And I will probably continue not packing it for whatever stupid reason.

So as I start to slowly climb in altitude and with every degree that the temperature drops, it’s just another reason as to why I should pack my heated gear.

Finally a distraction from the cold, I start to watch a pair of headlights come up behind me. Slowly at first but as they get closer their speed picks up. I watch them switch lanes and as they go to pass me, I switch off my Clearwater auxiliary lights and the truck immediately brakes and settles into a speed that matches mine and drives next to me a for a few seconds, then he slows down and drops in behind me at a comfortable distance. I flip the Clearwaters back on again and he never tries to pass again.

I had a planned gas stop in Payson, AZ and when I pulled into the gas station for fuel and relieve. The truck pulls up next to me and asks, “Hey man, what kind of lights do you have on that bike?”. He stated that as he got closer to me, he could see better and that made him more comfortable to pick up his speed but when I turned my lights off, he couldn’t see that far ahead anymore and decided to slow down. He finally decided that it was safer if he let me lead through the twisties. He then warned me of Elk in the area and we wished each other a good day.

Next couple of hours was ride, gas, repeat.

I arrived at my closest gas stop that I was going to use to the Trinity site in Socorro, NM which was just a few miles from the gate that would take me to the test site. I skipped my planned gas station for a Chevron station that was right at the edge of town. The pump’s display was only showing half the information needed to pump gas, but the pump did work, But I did have to go inside for a receipt re-print. It wasn’t that the LCD screen on the pump was burnt out from the sun, the information just wasn’t there. When it asked to print the Receipt Yes / No ? There was nothing on the keypad, side of screen or on the screen that indicated where the Yes and No buttons were. Mental note, don’t use this gas station on the way back.

My next stop was a quick stop in San Antonio, NM which was even closer to the base entrance. I stopped in real quick for a BIO break and bought a small bag of Planters Peanuts for .50 cents to get my closets DBR that I could to the site.

From San Antonio, I continued down 380 to the Stallion Gate entrance that took you down 525. A few miles down the road and I hit traffic entering the base. Though my wait was 45 minutes, it moved fairly fast and the guards had an efficient system that would allow them to check ID’s on multiple cars at a time and release them, allowing the line to advance 4 to 6 cars at a time.

At the Trinity site, there was ‘motorcycle parking’ near the entrance of the outer perimeter fence around the site. There is little asphalt here and you will be parking in the dirt.

As Brian mentioned, there are some Porta-Potties and various information booths setup and some vendors selling merchandise but there is no shade anywhere unless you are hugging someone’s trailer or the Fat Boy demo bomb.

The site itself is very unassuming given the history. At the center is the stone obelisk built on ground zero. Next to it, surrounded by a small and low rebar rail type of fence is the last remaining footer of the tower that held the bomb when it exploded. The rebar rail is more there to show people where it is and to keep people from tripping over it, than it is to protect what little remained.

After taking in the scenery and people watching, I bought two patched and coin from one of the vendors and of course it didn’t even occur to me to ask for a receipt.

Once back at the bike, I double checked that the SPOT OK message went through and found myself making my way back out to San Antonio, NM where I bought another package of peanuts, got my receipt and went on my way to Socorro for gas.

Entering Soccoro, I remembered not use the Chevron and went to the second of the three gas stations in town… a Shell station. The LCD’s on these pumps were just sun bleached and unreadable. So I went to the Conoco where the pumps were older, but everything worked.

Leaving Soccoro and back on 60 going west, back home to Las Vegas.

The entire trip I was going to be riding into the sun… I rode east in the morning, and now I will be riding west in the afternoon.

In the morning I froze all the way to the base and on my 500-mile return, I will be facing a 20-30mph headwind.

I set the cruise, sank down in my seat a little and decided to just enjoy the scenery… well its New Mexico… I did what I could.

Since I was going back into the mountains and climbing elevations with a head wind, my entertainment for the next 100 miles was doing gas calculations in my head. Eh, I should make my next gas stop.

On my way back I decided to stop at the Very Large Array radio observatory. It’s something that I always wanted to see and since I was here, I couldn’t let it go by without stopping. After spending a little time at the Visitor’s Center and walking around, I was back on the road… and I even made it my gas stop later on with some gas in the tank remaining.

Other than the wind, the rest of the ride should be easy sailing. I had two more stops to make for the Tour of Honor, one was a daylight only point and as I got closer, I knew I wasn’t going to make it, so I adjusted the GPS units to skip it. As I got into Northern Arizona, the sun went down finally but so did the temperatures. This time I decided to layer up BEFORE I got chilled which turned out to be a nice ride back home. See I did finally learn some thing.

When I did get back into Nevada, my planned finish was in Boulder City. After gas I showed 1,035 total miles completed in 20 hour and 45 minutes. I went through my end of ride paperwork and checklists, satisfied with everything, I hit the SPOT OK button one last time and I was done.